The Costs to Own and Operate a Pilatus PC-24

The PC-24 is the first jet-powered aircraft from Pilatus following years of successful turbo-prop production including the PC-12, which is highly desirable by the owner flown crowd. The first PC-24 was delivered in 2018 and like its sister turbo-prop it is renowned for having good short and rough field performance. Here’s a breakdown on the costs to buy and operate the PC-24.

First delivered 2018, the Pilatus PC-24t is a low-wing cantilever cabin monoplane powered by two Williams FJ44-4A turbofans, each mounted in a nacelle on the side of the rear fuselage. It has a T-tail and a retractable tricycle landing gear. The aircraft is designed to operate from short and rough airstrips and incorporates an advanced wing design, with a large double-slotted flap system to achieve the necessary performance, having a stall speed of only 81 knots at the maximum landing weight. The long-stroke trailing link landing gear smooths out uneven surfaces, and the dual-wheel main wheels have 70 psi of pressure to prevent sinking in soft surfaces. The wing flaps have a replaceable, abradable surface and shields the high mounted engines from loose debris which is critical to prevent engine foreign object damage. 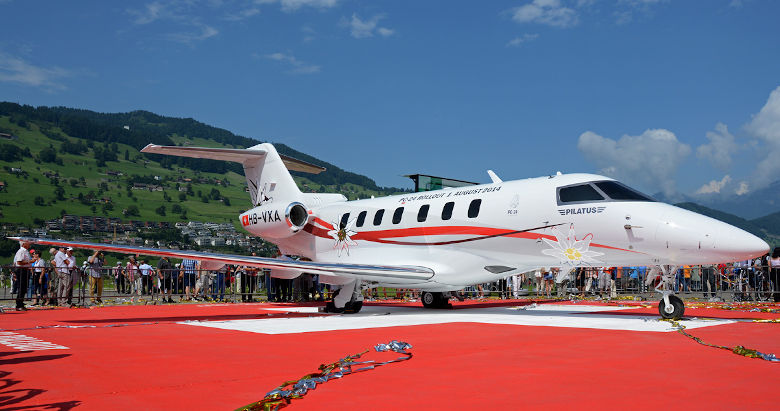 Based on these prices, if you are planning to finance part of the acquisition, a typical scenario may look like this, with a loan for $9,000,000 of the purchase price, financed at 2.5% over 10 years.

The depreciation on a PC-24 is currently about $467,000 per year market depreciation, with book depreciation of $1,142,400. Under current tax law you may be allowed to write off 100% of the aircraft in it first year if you are using it for business purposes.

While it is certified for a single pilot, most companies fly it with two pilots. 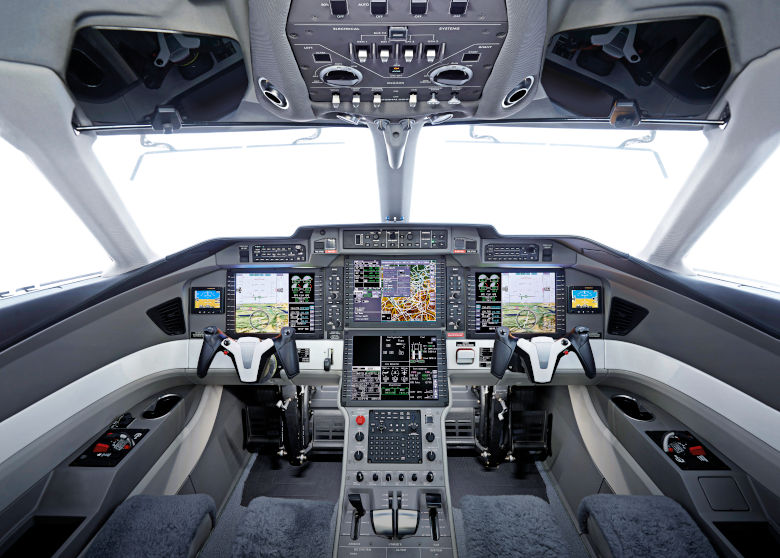 The main cabin is 17ft 3in long and 5ft 1in high. It can be configured to carry up to 11 passengers but is more typically configured as 6-8 passengers in business club seating, plus it has an enclosed lavatory. Swift broadband and on-board Wi-Fi can be installed as optional systems, and in-flight entertainment (IFE) solutions can make flights productive and entertaining. The cabin has two doors, a passenger door on the left-hand side near the front and a cargo door on the left-hand side at the rear, plus two over-wing emergency exits. Pilatus claims the PC-24 is the first business jet to be fitted with this standard pallet-sized cargo door giving it even more flexibility for various mission types. The interior color schemes of the PC-24 have been designed by BMW Designworks.

The PC-24 has an NBAA IFR Range of 2,013NM as depicted on the range map, and maximum payload of 4,180lbs. High speed cruise performance is 438kts or 504mph, or a very respectable long range cruise performance of 358kts or 411mph for maximum fuel efficiency. 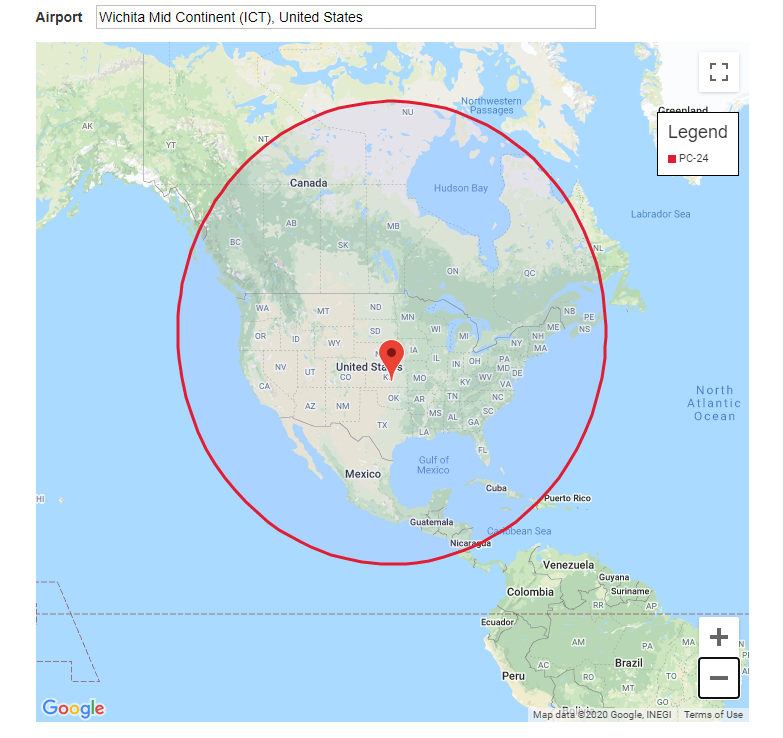 The maximum operating ceiling is 45,000ft, at 9.1psi cabin pressure, which is sufficient to not only get you over most weather conditions, but also get you to your destination comfortably.

These annual costs must be borne by a flight department irrespective of the level of aircraft utilization. Included are the salaries and benefits for flight crew (you could exclude the first officer salary if owner flown); pilot annual training, hull insurance cost computed by multiplying a liability factor per $100 of hull insurance; and liability insurance based on $25M in coverage.

These expenses are directly related to operation of the aircraft and are represented as an hourly cost figure. Included are Fuel Expense (assumed at $4.15 per gallon), Maintenance Labor Expense, Parts Expense, Engine, Avionics and Propeller reserves expenses as appropriate. The basis for the figures reported is actual operator experience compiled by AircraftBudgetAnalyzer.com. Parts, labor and reserves are predicated on the assumption that the aircraft is no longer covered by the manufacturer’s warranty.

Assuming the aircraft is operated 250 hours per year, which is typical for this platform, the total operating cost per flight hour is $7,975 with book depreciation, and $5,243 with market depreciation. Looking at this without the depreciation, the total annual fixed and variable costs are $851,403, equivalent to $3,406 per hour.

Direct Mission Costs for standardized BCA nautical mile ranges (300NM, 600NM & 1,000NM) include a bundling of mission fuel consumed as noted in the aircraft’s flight manual, maintenance labor, parts and reserve costs (Variable Costs), apportioned to the actual flight time for the nautical mile (NM) mission length. Fuel price used for this analysis is based on a nationwide average price of $4.15 per gallon for Jet-A. The fuel consumption figure accounts for taxi, takeoff, climb, cruise, descent, and landing for the applicable mission length.

The full suite of tools on AircraftBudgetAnalyzer allow you to fully customizes these numbers and reports to your precise requirements. For instance the fixed costs are broken down into many constituent parts, each of which can be updated for your specific models. You can change owner flight hours, see the contribution from charter hours and use different fuel prices. You can also compare the Pilatus PC-24 to other aircraft such as Embraer's Phenom 300 and Cessna's Citation CJ4. A 3 aircraft comparison is just $89, or to compare over 250 aircraft with a full year of access subscribe for just $950.